Baby2Baby provides children living in poverty with diapers, clothing and all the basic necessities that every child deserves.

Led by Co-CEOs Kelly Sawyer Patricof and Norah Weinstein, Baby2Baby is a mega diaper bank and nonprofit organization providing essential items to children in need across the country. In the last 10 years, Baby2Baby has distributed over 175 million items to children in homeless shelters, domestic violence programs, foster care, hospitals and underserved schools as well as children who have lost everything in the wake of disaster.

A Letter from Kelly and Norah

2020 has been an extremely challenging year for all of us. But it’s families living in poverty who are hit the hardest by any crisis, and COVID-19 has been no exception. On top of low-income communities facing higher exposure and infection rates, the families we serve are faced with the intense fear and pressure of how they will keep the lights on, put food on the table and provide essentials for their children.

The need for Baby2Baby has never been greater. In March, Baby2Baby was deemed an essential business and immediately responded to the 350% increase in need for diapers for mothers who couldn’t access them or were making them out of newspapers and towels and the 860% increase in requests for formula for parents who were even watering it down to make it last longer.

Our COVID-19 Emergency Response Program has also provided essential items to underserved schools and the students who rely on school for food and supplies, children placed in foster care due to increased abuse and neglect, homeless children and their families who don’t have the luxury of social distancing and hospitals and clinics treating families with COVID-19.

In just nine months, Baby2Baby has distributed 50 million critical items including diapers, formula, cribs, clothing, soap, masks, food and more to nearly one million children in over 100 cities across the country impacted by the pandemic. We will reach 5x more children this year than any previous year in our history.

There is so much work ahead for all of us. It has become increasingly clear that the impact of COVID-19 will be felt for not only months — but years — to come for families living in poverty, and we are only just beginning to see the catastrophic effects for the families we serve.

Thank you for your incredible support to make Baby2Baby’s work possible in this unprecedented year.

With our deepest thanks for your support, 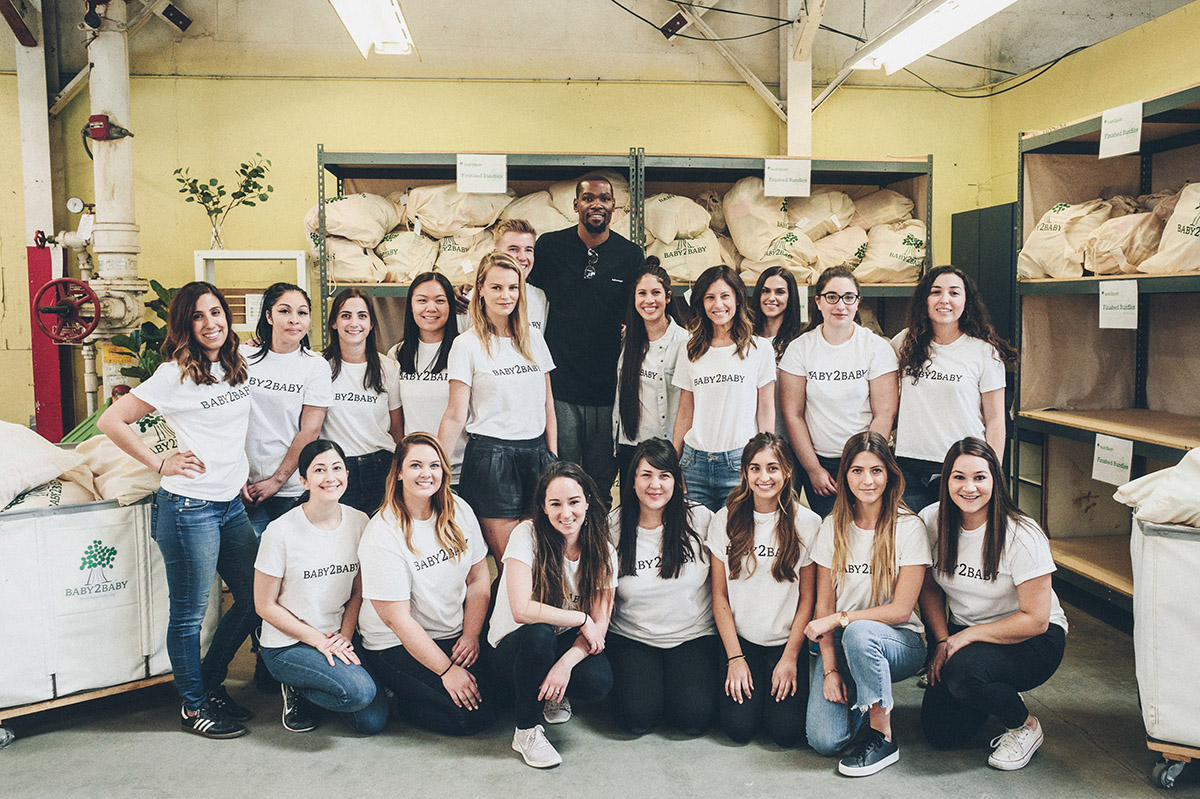 Norah Weinstein and Kelly Sawyer Patricof are Co-Presidents of Baby2Baby, a non-profit organization that provides low-income children ages 0-12 years with diapers, clothing and all the basic necessities that every child deserves.

Since assuming the leadership roles at Baby2Baby in 2011, Norah and Kelly have transformed Baby2Baby from a grassroots organization into a nationally recognized children’s non-profit that will serve over 180,000 children in 2018. Under their leadership, Baby2Baby has distributed over 34 million items including more than 20 million diapers.

Norah and Kelly have pioneered a uniquely innovative and high-impact approach to philanthropy through an unparalleled expansive celebrity engagement network and an effective corporate sponsorship program, which includes a diverse range of partners such as Huggies, Tiny Prints, and Old Navy.

Norah and Kelly have also grown the organization into a national thought leader in this space. In 2016, they were named a partner of the Obama White House for President Obama’s historic diaper gap initiative and in 2015, Baby2Baby announced its national expansion through the creation of the Baby2Baby National Network, broadening the organization’s reach to twenty additional cities throughout the country. They have also testified on behalf of several bills focused on alleviating the cost of diapers for low-income families.

Molly Baker is the Director of Events at Baby2Baby. In this role she plans, executes and evaluates a comprehensive event program including fundraising and community-building objectives, overseeing the annual gala and monthly children’s programming events.

Born and raised in Los Angeles, she moved to New York City after high school and completed her B.A. from NYU in Human Rights & Social Justice, and her M.A. from NYU in International Education & Development. While in school she interned for NYU’s Center for Human Rights & Global Justice and Every Mother Counts. Prior to Baby2Baby Molly has worked professionally in hospitality, managing restaurant teams and events in New York and Los Angeles.

Jamie LaMotte is the Director of Marketing and Corporate Relations at Baby2Baby. In her role, she is responsible for developing and executing corporate partnerships and multi-platform sponsorships. She also manages in-house communications including the organization’s social media, website and branding.

Jamie graduated from the University of Southern California with a B.A. in Communication. Prior to joining the Baby2Baby team, she spent 8 years at a digital + social marketing agency where she led marketing, PR, and social media strategy for her clients. Jamie and her husband reside in Sherman Oaks with their daughter Ellie.

Amanda Peterson is Baby2Baby’s Senior Warehouse Manager and oversees the flow of donations in and out of the organization’s warehouses. She also works closely with social workers, counselors and case managers to help them find the right items for their clients. Amanda graduated from Boston University with degrees in Sociology and Psychology and she fell in love with service while interning at Cradles to Crayons in Boston. After returning to Los Angeles, she sought out similar organizations and started with Baby2Baby as an intern before joining the staff in January of 2013.

Emily is the Volunteer Coordinator at Baby2Baby. In this role, Emily works to extend the reach of Baby2Baby in the community by overseeing the Volunteer Program. Emily is originally from Los Angeles and graduated from the University of Arizona. Emily discovered her passion for volunteering early on and has been involved in the Boys and Girls Club and volunteers as a Big Sister in the Jewish Big Brother Big Sister program. Emily worked in the entertainment industry prior to joining the staff at Baby2Baby in May 2018.

Courtney Kelly is the Senior Program Coordinator at Baby2Baby. In her role, she is responsible for connecting our network of Baby2Baby partner organizations to essential items for low-income families in Los Angeles. Additionally, Courtney provides support to the Baby2Baby National Network program and Baby2Baby’s disaster relief efforts.

A New York native, Courtney graduated from Emerson College in Boston in 2010 and soon after moved to Los Angeles where she worked in Hollywood for a few years. Her desire to be a part of a positive impact on the world around her led to her transition to the nonprofit sector and she joined the Baby2Baby staff in 2014.

Ashley Housman is the Americorps Vista at Baby2Baby. Ashley is a Los Angeles native and graduated from the University of San Diego. After spending time in the corporate world, she found her passion for giving back to her community by volunteering at Baby2Baby – which led her to apply to the Americorps Vista program and is currently serving her year here.

During her year of service, she will work with the Community Engagement Team to mobilize, expand and develop the Los Angeles volunteer program!

We would love to hear from you!